Criminal Charges Put Your Reputation, Livelihood and Freedom on the Line.
Contact Us Now For a Free Consultation
Home
Case Results 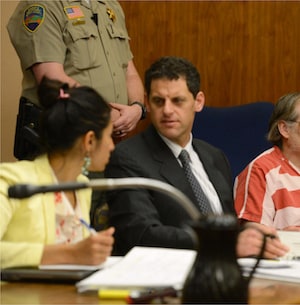 Below are examples of results Mr. Coffino achieved defending his clients. Every case is different and the outcome depends on many factors. Results vary from case to case.

Rape defendant acquitted – Mr. Coffino went to trial on multiple counts of forcible rape and related sex charges. The jury found the defendant not guilty on all substantive crimes with only a misdemeanor conviction for failure to register as a sex offender.

Murder defendant not guilty on all charges – Jury acquittal in case with potential life sentence. Mr. Coffino presented a self-defense case with evidence of the deceased’s prior violent and threatening behavior toward the defendant and others.

Not guilty at trial on multiple child molestation charges – jury acquitted on 8 of 10 felonies with client released from jail and probation granted on least serious charges (going to meeting place for sex with minor, for which he was entrapped by police posing as minor).

Knife assault dismissed before trial – defense investigation showed alleged victim had history of violence against client and motive to lie.

Not Guilty Verdict in Murder Case

Mr. Coffino’s client shot and killed an intruder and was charged with murder. The victim had taken the defendant and his roommate hostage at knifepoint after they called the police, all of which was captured on a 911 audio recording. While the case was pending the roommate-witness committed suicide, complicating the presentation of evidence. At trial Mr. Coffino presented a self-defense theory and the jury found his client not guilty.

Mr. Coffino represented a man accused of multiple counts of forcible rape, false imprisonment, sexual battery and failing to register as a sex offender. Allegedly, the defendant lured a teenage girl into his domicile and sexually assaulted her. Mr. Coffino’s defense strategy focused on the credibility of the alleged victim. The jury acquitted his client of all felony charges.

Mr. Coffino’s client was shot three times by a deputy sheriff, who emptied his service weapon at client's fleeing vehicle, which he claimed was trying to run him over. Mr. Coffino’s investigators and experts obtained the deputy’s firearm and the bullet-riddled car, test fired the weapon and used animation software to reproduce the bullet trajectories. The analysis showed that the deputy was not in the vehicle’s path of travel when he fired and the prosecution dismissed the case on the eve of trial.

Mr. Coffino represented a man charged with 10 felony counts of sexual penetration and other molestation crimes. Defense investigation showed the minor posting Internet sex partner ads lying about his age, which raised a mistake-of-age defense. The jury acquitted on all felony sex charges.

Mr. Coffino’s client was charged with felony gun possession after he was arrested during a nightclub shooting. Mr. Coffino filed a motion to suppress the evidence and sought review in a higher court. The prosecutor agreed to a misdemeanor with time served.

Mr. Coffino’s client was charged with forgery, identity theft and drug crimes and he moved successfully to suppress the evidence based on illegal police conduct, which resulted in a published appellate case on search and seizure law.

The father of a toddler with a brain injury faced up to 17 years. The defense theory focused on possible accidental injury or a different perpetrator. The jury found Mr. Coffino’s client not guilty of all charges.

Mr. Coffino’s client was alleged to have repeatedly exposed himself to female correctional officers at San Quentin. The defense centered on the lack of privacy afforded prison inmates. In his closing argument Mr. Coffino drew on studies of 18th century prison architecture to support the argument that his client was effectively living in a public place. The jury found his client not guilty of all charges.

The defendant was a prison inmate charged with battering a correctional officer. Via pretrial motions opposed by the California Attorney General Mr. Coffino obtained information about the guard's physical abuse of another inmate and called that inmate to testify at trial. The jury found his client not guilty.

Prison guards located a razor blade with an attached handle in the prison cell of Mr. Coffino’s client, exposing him to ten additional years. The defense centered on the client's avocation as an artist, which required sharp tools. Mr. Coffino called the former warden of the prison as an expert witness. The jury found his client not guilty.

Mr. Coffino’s client was charged with sex assault on a child with a possible life sentence. Defense investigation showed that injuries allegedly caused by the defendant were in fact "iatrogenic" traction injuries received during a forensic examination. Mr. Coffino filed a motion to exclude key prosecution evidence about the injuries and the DA eventually agreed to resolve the case with the defendant immediately released from custody.

Mr. Coffino represented a pregnant woman with a long addiction history. His argument for her right to receive drug treatment instead of jail pursuant to Proposition 36 made new law in California, making such treatment available to people throughout California who had previous treatment failures.

Mr. Coffino’s client was charged with failing to register as a sex offender, and with having two prior strike convictions, exposing him to a possible life sentence. The trial included separate guilt and sanity phases and raised the novel question whether a registrant temporarily domiciled in a new county must register there. The judge granted Mr. Coffino’s request to dismiss a prior conviction, reducing a possible life sentence to six years in prison.

Mr. Coffino represented a man accused of kidnapping, false imprisonment, criminal threats and spousal battery. He had allegedly held the victim captive and forced her to accompany him across the state. A jury found the defendant not guilty of the most serious kidnapping and criminal threats charges while convicting on the less serious charges.

An undercover drug investigator wearing a hidden microphone made several purchases of large quantities of precursor chemicals from the client. Mr. Coffino disputed the chemical composition of the powders and their utility in drug manufacture. His expert testified about the molecular structure of various compounds. Mr. Coffino’s client was acquitted of two felonies and convicted of a third, receiving probation with no further jail.

Contact Us
Practice Areas
Client Reviews
★★★★★
Mr.Coffino saved me! He and his investigator got evidence that I didn't commit the crime I was accused of: Felony Assault With a Deadly Weapon. Charge was dismissed. Mr. Coffino is highly intelligent, professional, and actually cared about me. This is the attorney that the Marin IJ stated "the best attorney money can't buy" when he worked for the Public Defender's Office. And he really cares about his clients!!! JR
★★★★★
Mike is an amazing, strong, and articulate lawyer that will not only point out the facts that are relevant to one's case but, will make sure that he has addressed every concern that you have to the court/judge. I was also very impressed with Mike's closing arguments. They were strong, very well referenced, and specific to the my case. For those that are wondering if Mike is the man for the job, HE is definitely the MAN you want representing you in your case. EM
★★★★★
I had some experience with lawyers in the past but not like Mike. He was a bulldog in the courtroom. His closing arguments were off the charts and we won. Thanks Mike!!! CH
★★★★★
Best attorney I could of asked for. I never had any doubts about him, I knew from the beginning he was going to do his best to help me and that was exactly what he did. Very informative about what was going on, he would lay out a plan and do exactly as he would say. Very good attorney. Strongly recommended. AM
★★★★★
I’ll never be able to explain everything you did for me. He did so much in my domestic violence case. When I called, he answered every time. He was there for me. He saved my life. What more can I say? I will never be able to repay him. FM
View More
Submit a Law Firm Client Review